Joshua Wong Judicial Review Scholarism by Michael Wong | on October 12, 2015 | 0 comments | in Campaigns | Like it 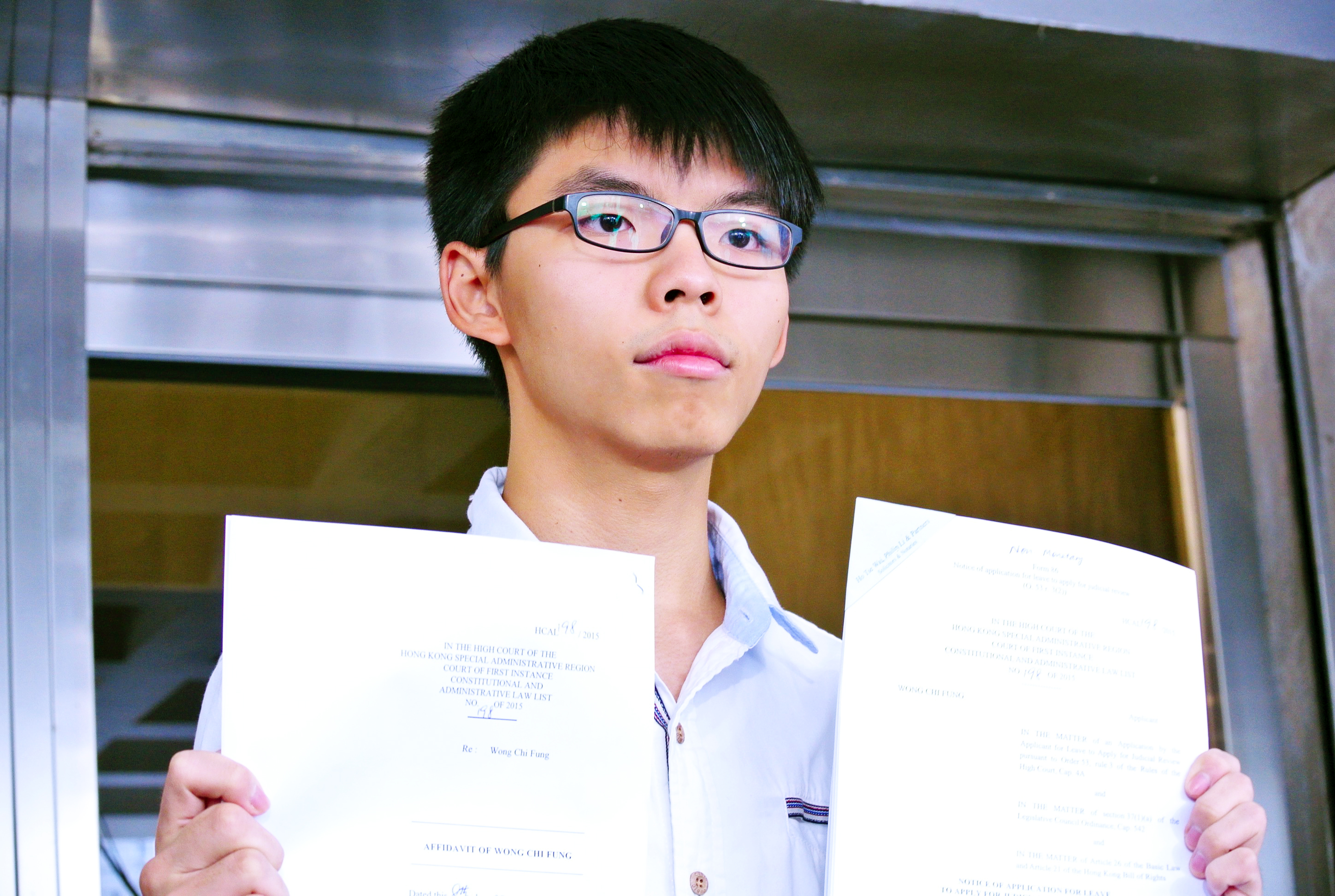 Scholarism convenor Joshua Wong Chi-fung, who turns 19 on Tuesday, filed a judicial review demanding the Court lower the lower age limit for LegCo candidates from 21 to 18.

He will consider running if successful.

Joshua Wong wants in – and he’s not prepared to wait.

Time Magazine’s Person of the Year nominee is barred from running in the 2016 Legislative Council elections. He has launched a judicial review (JR) to fight for his right to represent the people of Hong Kong.

According to Wong, who turns 19 on Tuesday, the decision has been around three months in the making. “During the past few months after the political reform vote, student bodies discussed different issues about our future beyond 2047, and we realised these discussions only existed in civil society [among political activists]. To bring these issues to the broader public, we decided to bring them into the Legislative Council.”

“…the average age of the Legislative Council member is quite high at 57 years old. It’s ridiculous.” – Joshua Wong, convenor of Scholarism

Wong believes the current elections ordinance, which prevents 18 to 20 year-old youths from having equal rights to vote and to be voted for, violates their rights “as promised according to human rights laws and the Basic Law”.

When asked what was the trigger point for making this decision, “I think the trigger point was realising that the average age of the Legislative Council member is quite high at 57 years old. It’s ridiculous. It is quite ironic given that for anyone who hopes to run in the election of the Standing Committee of the NPC, the age limit is just 18. It’s unreasonable for the HK government to set the requirement at 21 years old. We hope all adults in HK [will] have the equal right to run in the election and vote in the election.”

While he has declared his intention to run if the judicial review is successful, Joshua Wong has suggested he has no current plans to join or form any political parties. “The process for JR requires at least between 3 to 6 months, so I don’t have any plans to join any parties,” he says. “Besides, I don’t see any pan-democratic parties who identify with our concerns about 2047 and self-determination.”

Joshua Wong has suggested he has no current plans to join or form any political parties.

Instead, Wong hopes for a new generation of legislators that will enter parliament to change the pan-democrats’ conservative political culture. He refuted suggestions that 18-20 year olds would not be able to shoulder the responsibilities of legislators and believes they can be more persistent in their non-cooperative efforts.

“The new generation has more persistence to be involved in filibusters, and could show more persistence on new goals to fight for democracy, such as self-determination, and constitutional reform,” says Wong. “Even if some of the politicians are older or more experienced, they aren’t necessarily mature enough. Ann Chiang (蔣麗芸, GC – Kowloon West, DAB) is one of the best examples.”

Joshua Wong’s detractors in the more radical political circles, especially among localists, have long predicted that Wong’s goal was to enter the legislature and enjoy the limelight and resources. While attempting to fulfil that prophecy, the current student leader insists he only wants to bring younger voices into legislature, and suggests that he is in fact sacrificing the moral aura that comes with his student identity to achieve his political aspirations. “It would be safer for me to continue as a student leader, because you have that “student halo of glory” above your head. But if I won’t be able to push for referendum, constitutional reform, and self-determination in a student role, I might as well give that up,” he says. “I can’t always be a student, I will graduate in four years. So it’s time to think about the next step. Some might say I’m just trying to grab on to glory, but as a student leader, you’re seen as pure, and you have the moral high ground, so in fact [by running for LegCo], I’m actually giving it all up.”

“Some might say I’m just trying to grab on to glory, but as a student leader, you’re seen as pure, and you have the moral high ground, so in fact [by running for LegCo], I’m actually giving it all up.” – Joshua Wong

Because Scholarism is a student body, members are not allowed to run in elections. Joshua Wong has stated he will not be a member of Scholarism anymore if he runs.

The application for judicial review will be headed by Senior Counsel Anson Wong Man-kit and Progressive Lawyers Group convenor, barrister Wilson Leung Wun Shun. Joshua Wong stated that his lawyers have suggested they have more than a 50% chance of winning the case.

Any application for judicial review must first obtain “leave” [i.e. permission] from the court. The time frame for that depends on the current pending cases in court and will take at least two months. The process for JR requires at least 3 to 6 months. Even after the application is successful, amendments in legislation must be completed in the Legislative Council.

When Joshua Wong, who currently has several pending cases related to the Occupy Movement last year, was asked whether he was worried the judicial review might not be completed before the LegCo nomination period in July next year, he joked, “I might be in jail anyway.”