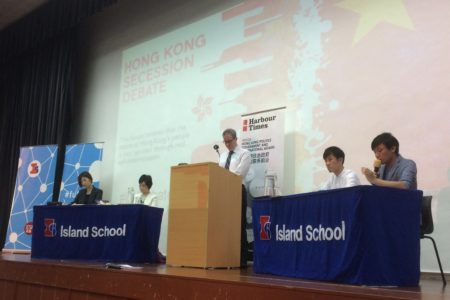 In what is surely a first, two opposing camps have come together to hold a public debate on Hong Kong’s secession from China. Harbour Times was on the scene.

Yesterday, two Hong Kong political groups from opposing camps made history in the Island School Hall, participating in the territory’s first political debate on self-determination and secession from China. The morning event – jointly hosted by Harbour Times and Island School and moderated by Harbour Times – featured participation from the New People’s Party’s (NPP) Regina Ip Lau Suk-yee (葉劉淑儀) and Eunice Yung Hoi-yan (容海恩) on the one hand and Cheng Chung-tai (鄭松泰) and Kenny Wong Chun-kit (黃俊傑) of the localist groups Civic Passion and Youngspiration on the other.

Although the debate was civil, the speakers were not short of the strong opinions for which they are known.

Ip set the stage for her team’s positions early. “This should be a Hong Kong succession but not secession debate,” she commented, referring to the succession in rule between the British and the Chinese.

As Ip later clarified, she sees difficulty in redefining Hong Kong’s cultural identity, which she sees as firmly Chinese.

“Hong Kong’s success, actually, is based on the chemistry of a fusion of cultures, traditional Chinese culture as well as Western values which underpins our system. It is hard to say Hong Kong has a culture,” Ip stated. “Ethically, you cannot identity a Hong Kong race which is ethnically divorced from the rest of Chinese people.”

Unfortunately, Ip made no mention of how she distinguishes between the loaded concepts of “identity”, “ethnicity”, and “race” – key concepts in the growth of nationalist movements that underlie many of the globe’s most contentious secession disputes. However, she and her debating partner did spend some time covering practical considerations.

“It is hard to say Hong Kong has a culture.” – Regina Ip

For example, Ip, a former Secretary for Security, mentioned national security issues. “[If] Hong Kong becomes an independent state, how do we defend [against] external domination?” she asked. “In reality, we need an army. We need to raise tax.”

As for Yung, the NPP’s rising star pointed out the damage Hong Kong might suffer in the economic sphere. “Hong Kong is a trading and financial hub,” she argued. “Political separation from China would [cause] huge damage to Hong Kong.”

Ip also pointed out some of the political hurdles. “Any request put forward by the quote ‘Hong Kong race’ or ‘Hong Kong people’, no matter how you define it, when putting to the United Nations will be vetoed [by China as a permanent member of United Nations Security Council].”

Yung seconded Ip’s concern, pointing out the difficulty of engaging in unilateral secession under international law.

In what was one of the debate’s more poignant moments, Civic Passion’s Cheng Chung-tai  recounted his own loss of innocence regarding China’s development. Having once hoped China would liberalise culturally and politically as well as economically, he had a change of heart, following years of study and his acceptance of a PhD from Peking University. “I am a ‘Hongkonger’ but not ‘Chinese’,” he explained.

“Why we call for separation, instead of succession, is that we have an assumption Hong Kong is being ‘re-colonised’ by the CCP [Chinese Communist Party]. This is the straightforward and concrete assumption that I’m sure you would feel it is also the reality. The reality is determined by the way we live, our rule of law, our autonomy, our language, our culture and also our identities,” Cheng noted.

“Why we call for separation, instead of succession, is that we have an assumption Hong Kong is being ‘re-colonised’ by the CCP.” – Cheng Chung-tai

Referring to Hong Kong’s mini-constitution, he said, “The Basic Law is not made by us, we the Hong Kong people … Hong Kong was set aside,” Cheng stated. “The only way to protect our own Hong Kong culture [and] our language [and to] to protect our rights to determine our identity is to rewrite the Basic Law.”

Youngspiration’s Kenny Wong Chun-kit (黃俊傑), Cheng’s debate partner, even called the Joint Declaration “illegitimate” due to the lack of participation of Hong Kong people. Neither addressed the political challenges of getting the mainland authorities to accept such a bold action.

Cheng also took some time to refer to potential challenges for Hong Kong from China’s credit woes and other economic difficulties. “Hong Kong independence is a way for better risk management for our Hong Kong people.”

On the contentious issue of the post-2047 landscape, the two sides were no closer to agreeing. Cheng highlighted that land leases would be a problem after 2047. In addition to his broader concerns over the Basic Law, he maintained that this was a problem in need of fixing. Specifically, he described Article 5 of the Basic Law, which specifies that Hong Kong’s capitalist way of life will remain unchanged for 50 years, as a bug that needs fixing.

Ip does not share his worry. “Former Chinese leader Deng Xiaoping (鄧小平) once argued, when things go smooth, then the status of Hong Kong could be kept unchanged.” She believes the arrangement may be extended.

While, at times, the speakers seemed to talk past each other in this first-of-its-kind debate, the fact remains that it did offer a chance for political opponents to air their grievances in the same room. More such opportunities may be necessary if Hong Kong stakeholders are to come together to hammer out compromises in the future.