HONG KONG SAR – Media OutReach – 13 July 2021 – A research project led by Hong Kong Baptist University (HKBU) entitled “Building Platform Technologies for Symbiotic Creativity in Hong Kong” has been awarded HK$52.8 million in research funding from the Theme-based Research Scheme (11th round) under the Research Grants Council (RGC) for a five-year project. This is the first time that major funding has been allocated by the RGC for an art-tech project. 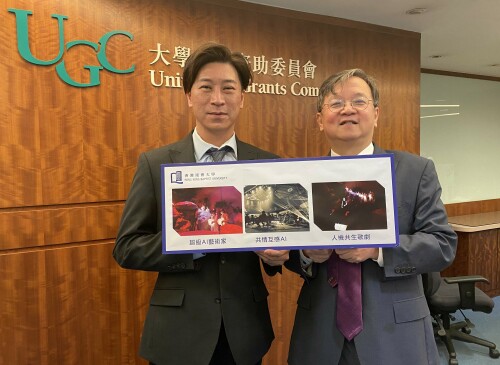 The research team will develop platform technologies for symbiotic creativity, providing unlimited art content for humans, including an art data repository, an artificial intelligence (AI) creative algorithm system, a research theatre, a digital art and policy network, and some unique and creative application projects, to usher in a new era of art technology.

Led by Professor Guo Yike, Vice-President (Research and Development), and Professor Johnny M Poon, Associate Vice-President (Interdisciplinary Research), at HKBU, the research team will develop an immersive and interactive extended reality (XR) platform to capture human data during the artistic creation and appreciation process, which includes the cognitive and physiological data of artists and the audience, such as brain waves, body temperature and heart rates, gait and movements, etc. The platform will then convert the data into the descriptors of cognition, emotions, and behavioural patterns.

The researchers will associate and link the artworks with the descriptors to build a comprehensive and extensive data repository for artificial intelligence model training. It will enable machines to learn human aesthetics, instead of mimicking art created by humans.

The platform will also enable the audience to immerse themselves in a virtual world. They will be surrounded by images, sounds, etc, and have new artistic experiences. In addition, the immersive and interactive XR platform will be equipped with a number of sensing devices, which will help the artists to go beyond the traditional forms and boundaries and communicate and interact with the audience in new ways.

“This research project has secured funding from the RGC, demonstrating that Hong Kong attaches great importance to the development of artistic and creative technologies based on AI. This project stands at the forefront of the arts and science nexus, harnessing the power of science and technology to advance human and AI interaction in art creation. It will foster a new direction in art created by both humans and machines,” said Professor Guo.

“We will spare no effort in building a world-class AI art creation platform, and it will drive a new revolution that transforms the creative and cultural industries. It will enable Hong Kong to assume a leading position in art-tech on the global stage,” he added.

Under this project, HKBU will launch three application projects: the Super AI artist – the world’s first “Combined Music and Art Biennale”, which will host multidisciplinary musical works and artworks jointly created by humans and AI; Shared Mind and Empathetic AI – a concert series featuring a three-way collaboration between performers, the audience and machines; and Symbiotic Opera – a new form of opera that integrates with immersive XR technology, and it will be jointly created by humans and machines in an immersive virtual world.

Media OutReach is a global newswire with expertise in press release distribution across Asia Pacific. It is the only newswire that owns its own distribution network across 22 countries in the region.